We doubled-back down the hall from the children’s room and continued on through an archway of heavy, carved wood, making our way into the library.   When I had begun researching this abandoned manor  this was the room I looked forward to most, and we weren’t disappointed.  Hundreds upon hundreds of volumes, some in perfect shape and others little more than a pile of pulp from where they’d weathered moisture and mildew for decades.  The oldest volumes we found are pictured above, dating back to the 1860s.  Much like the other wood in the house, the floor to ceiling book shelves are all hand-carved, each of the doors still sporting its glass windows.  We also found a collection of newspapers from the 30s, 40s, and 50s, all in remarkable condition.

We spent the majority of our time browsing the old volumes, checking for dates, reading passages, and marveling at these treasures, rotting away to dust in this gorgeous, derelict building.

We ascended the staircase to the first floor (that’s the 2nd floor in US terms) hands firmly on the wooden rail in the vain hope that, should the whole thing start to collapse, the railing would save us. We made our way down a dark hall and crawled through another hole knocked into a locked door, human cat flap style. Once inside we discovered we were standing in what would have been the children’s bedroom or, at the very least, playroom. Jigsaw pieces littered the floor among plastic and wooden figures belonging to a hundred and one different board games. We found letters from Granny, post cards, an acrylic art set, countless toys and illustrated books.

Although I’m not sure which is more off-putting: the creepy, beat up pram sitting in the corner of the room or the dead bird lying in it’s own wire bird cage, now rusted with age.   It’s as though the family picked up and left in the middle of the night, forgetting about poor Polly!

The kitchen was surprisingly small for such a large house, in keeping with the English tradition I suppose.   The cookery was spread over the visibly obvious kitchen and an adjacent room, to which the ceiling had either collapsed or perhaps it had served as a kind of conservatory. The kitchen contained many different types of glass bottles and old animal husbandry products, such as the “Gaseous Fluid” which, near as I can tell, was like a gripe water for livestock.  Dense cobwebs covered the sink near the window as well as other parts of the room which made me very grateful we went in the winter, lest we encounter the denizens of those massive webs!    Pictured above you’ll even find a golliwog jar, a true (and racist) testament to days gone by

When I first saw photos of this abandoned manor online, I literally ached inside for the chance to photograph it.  As I began researching the property in the UrbEx community however, my hopes began to sink.   It’s next to a farmhouse?  You have to get over a five foot high corrugated metal fence, and then past an additional large chain link fence?  The farmer has caught people before?

THE PLACE IS GUARDED BY A BULL THAT THE FARMER KEEPS IN THE YARD FOR THE EXPRESS PURPOSE OF DISCOURAGING URBAN EXPLORERS???

Despite the sinking feeling in my stomach that this was starting to sound impossible, I decided to give it a go anyways.  Along with my friend Alicja, we decided we were up for the challenge and once we were over the fence there was no turning back.   My research had paid off, as the entry point to the manor was exactly where others had said it would be (A broken window) along with the trick to get past the chain link fence.  And, even though a few people have reported aggressive behavior from the bull, he was pretty chill for us, staring at us languidly whilst munching hay.

Words cannot begin to describe how awesome this place was.   It is a time capsule from the 1930s and 40s,  and the whole place looks as though the previous occupants simply got up and walked out one day and no one has touched it since.  This gigantic property was a treasure trove of everything from the amazing to the downright bizarre and everything in between, from a large pipe organ to an old timey typewriter, newpapers dated from the 30s to a fully stocked, floor to ceiling LIBRARY.  Needless to say we both had an amazing time discovering what this rare house had to offer, and it was truly a once in a lifetime find.

We entered the manor through a broken window, into a room filled with interesting debris, products from the 30s and 40s, and odd little statuettes, among other brik-a-brak.  Immediately we succumbed to sensory overload: there were a million and one details to look at, take in, and focus on,  our eyes dried rather quickly as the onslaught of million year old dust began, and the room smelled distinctly old and mildew-y.   We exited the room by crawling through the knocked-out bottom half of a large, locked door and made our way into the foyer.  The grand staircase spiraled up and up, it’s hand rails all made of some heavy (and no doubt, expensive) wood that had been hand carved, the whole thing culminating at the top of the house in a beautiful skylight.  The stair’s carpet runner was in serious decay, and sitting on one of the steps was an incredibly old and worn (but still readable) Bible.  The top floor was accessible only via the ladder shown in the photos, a daring feat which Alicja had no problems undertaking as she climbed up the three story wooden ladder, only to report there was nothing to see at the top.

In the foyer there stood a desk with an old typewriter and what looked to be some sort of guest log, with signatures dating back to the late 30s.   Postcards and faded photos littered the floor.  We made our way into the “deer room,” marveling at the tattered curtains, the old radio, and of course… the deer head, which someone had managed to insert a fake flower into the corner of it’s mouth. 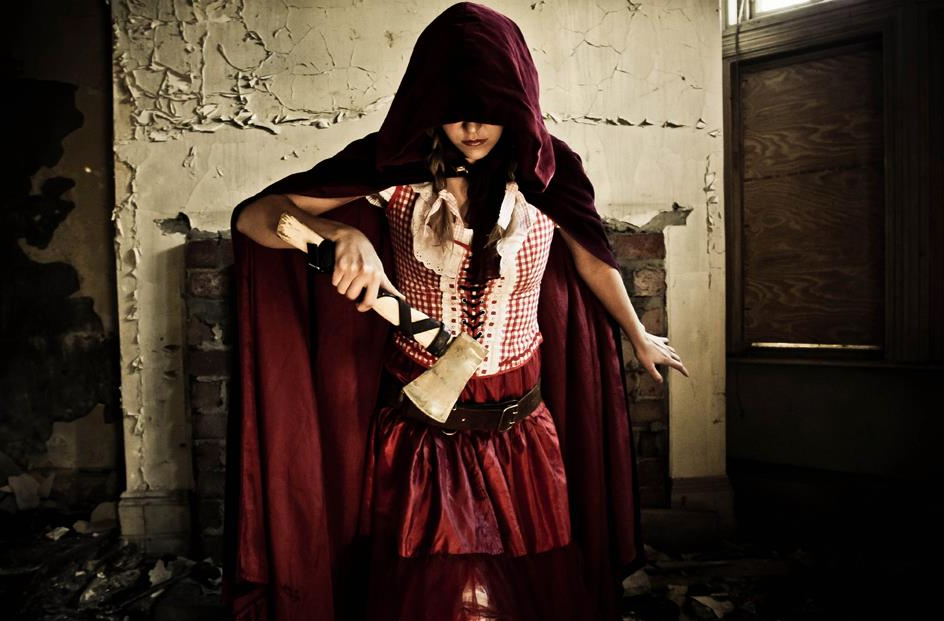 Potter’s Manor outside of Crowborough, East Sussex.  I used this site to shoot a dark Little Red Riding Hood series with a few friends.